The Friends of Norris Dam State Park are concerned with supporting the park’s goals and efforts of preservation, interpretation, and recreation.  Our work and efforts are offered in many ways.  We help with volunteer projects, sponsor park events, purchase needed items, and assist with large scale projects.

The group has adopted a two mile stretch along Highway 441 that runs along the west side of the park.  Multiple times a year we organize a road side clean up and pick up litter along the road.  We have also planted trees throughout the park, worked on trails, and assisted putting up a gate in Hill Cave.  This effort was to help monitor and hopefully increase the cave’s bat population.  We work with the park and co-sponsor several special events.  In the spring there are two weekends of spring wildflower hikes and a week long Jr. Ranger camp in July.  The fall is a busy season for us.  Pickin’ in the Park is a night of bluegrass music, BBQ, and friends, and is on the first Friday of October.  At the end of the month, rangers take groups out on the pontoon boat to enjoy fall colors while they talk about TVA, Norris Lake, and fauna.  Holiday Homecoming is the second Saturday of December.  Half of the rustic cabins are transformed to the 1930’s era.  They depict and interpret life before Norris Dam, coal mining, honor our nation’s veterans, and Santa makes a stop for children to tell their Christmas wishes.  The area is lighted by luminaries giving it a cozy feel. 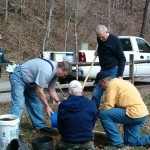 As a group we have also purchased items the park staff needs.  We have purchased safety equipment, such as an AED and rappelling gear for search and rescue operations.  On a yearly basis we buy programming supplies.  Rangers and seasonal interpretive rangers use these supplies for programs at the park and when they visit schools, scout groups, community groups, and others.  We buy arts and crafts supplies as well as books, and have also purchased bat equipment, an 18th century period dress, a telescope for night sky programs, and a pontoon which rangers take hundreds of visitors on each year to enjoy the lake.  We also ensure the maintenance crew has what they need.  We have purchased them weed eaters, backpack blowers, a pressure washer, and a rototiller.

We have actively helped and gotten accomplished large scale projects and gaining community outreach support.  We contacted local and state officials to build picnic shelter 2, which is rented almost every weekend during the summer and fall.  When Norris Dam State Park closed in 2001, we responded as a community to show our support of the park and were part of a larger effort to reopen Norris Dam.  The friends group has helped with preservation projects by keeping public land free of private enterprises.  We helped with a grant to build foot bridges on Rock Creek Trail and install fitness equipment on the Fitness Trail.

We would love to have you part of the friends’ group!  Please click on the link below for more information and how to become a member.